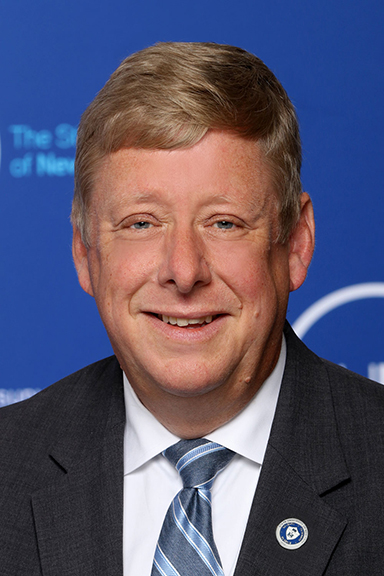 Most recently, Dr. Tod Laursen served as the Senior Vice Chancellor and Provost of the State University of New York (SUNY), from September of 2018 through December 2020. Dr. Laursen joined SUNY from Khalifa University (KU) in Abu Dhabi, United Arab Emirates, where he was the founding president and served as its leader since 2010. In February of 2017, KU as it exists today was formed by the merger of three Abu Dhabi higher education institutions: Khalifa University of Science, Technology and Research (KUSTAR); the Masdar Institute; and the Petroleum Institute. Dr. Laursen had served as the president of KUSTAR for the first seven years of his tenure in Abu Dhabi, and was subsequently named leader of the merged institution.

Prior to becoming President of Khalifa University, Dr. Laursen was a member of the faculty of Duke University (USA) between the years of 1992 and 2010, during which time he had appointments in civil engineering, biomedical engineering, and mechanical engineering. He served as chair of the Department of Mechanical Engineering and Materials Science from 2008-2010, and served as senior associate dean for Education in the Pratt School of Engineering from 2003-2008. In the latter capacity, he had oversight responsibility for all undergraduate and graduate engineering programs at Duke.

Dr. Laursen earned his Ph.D. and master of science postgraduate degrees in mechanical engineering from Stanford University and a bachelor of science in the same subject from Oregon State University. He specializes in computational mechanics, a subfield of engineering mechanics concerned with development of new computational algorithms and tools used by engineers to analyze mechanical and structural systems. He has published over 100 refereed articles, book chapters, and abstracts, and has authored or co-edited two books. His particular focus is development of methods to analyze contact, impact, and frictional phenomena in highly nonlinear and complex systems.

READY TO GET STARTED?

Detailed information, brochures and forms can be mailed to you upon request.

Complete and submit your application to SUNY Polytechnic Institute.