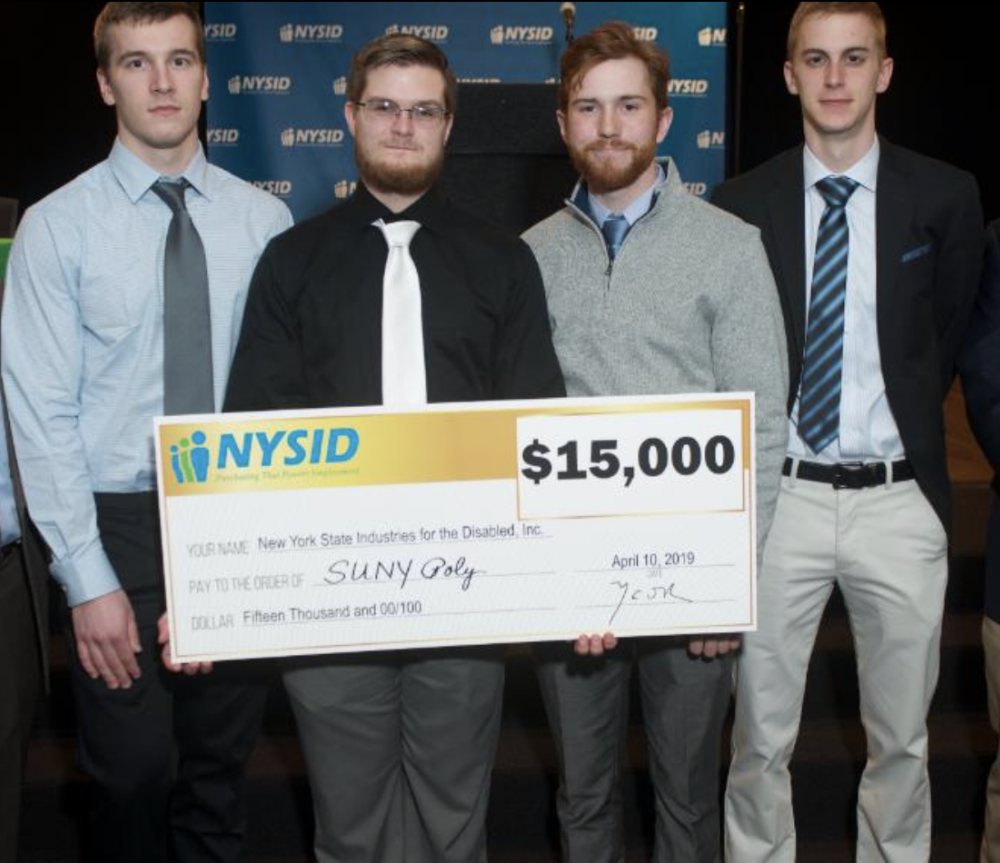 UTICA - A team of SUNY Polytechnic Institute (SUNY Poly) engineering students are being recognized for taking first place at the 2019 CREATE Symposium for their innovation in designing a device that helps workers with disabilities in the Mohawk Valley do their jobs more easily and efficiently.

SUNY Poly’s team, consisting of students Ethan Mead, Hugh Harwood, JJ Besse, and Vincent Legnetto, took home a $15,000 award for their invention of a six-pack plastic yoke remover designed for a group of about 20 employees with disabilities who re-package beverage cans at an ARC facility in Marcy.

The students’ win was formally celebrated with the adoption of New York State Senate Resolution No. 1496, sponsored by State Sen. Joseph A. Griffo, Rome, which congratulated the team.

Besse, Mechanical Engineering, B.S., ’19, was a member of the team led by SUNY Poly Associate Professor Dr. Yu Zhou, participating in the CREATE program by the New York State Industries for the Disabled Inc. (NYSID). The goal of NYSID CREATE program is for engineering students statewide to collaborate with NYSID member agencies to help to improve the workplaces of people with disabilities.

JJ said the idea for the project—which was also his senior capstone design project—came to the group after a visit to the facility.

“Immediately, we thought it was really tedious because all of these cans are already in their plastic six-pack holders,” he recalled. “Employees had to individually remove each can from its plastic six-pack yokes and reinstall them into variety packs.”

The team took a scale to the site and determined the force needed to remove cans from the yokes was about 25 pounds per six-pack. The finished prototype was able to remove 24 cans at once, or four six-packs.

“There were a few problems we needed to figure out before it went into full production,” JJ said, noting one or two of the cans would occasionally tip while being removed. “But we delivered a fully working prototype to them and it was really cool.”

While attending the 2019 CREATE Symposium, the team enjoyed learning about the other 20 submissions and is hopeful a future student team may work out some of the minor flaws so their invention may be fully implemented.